Back in college, I occasionally ran into a shirtless Asian man who rode bicycles and would high-five strangers across campus. His name was Woncho. A not-so ordinary man, he’s a pretty remarkable individual.

We discuss his impulsive trekking across North America and Canada. Even though traveling with strangers is delightful, Woncho doesn’t stray from describing his daily struggles. There is more that goes into this hitchhiking thing than I initially expected. Woncho integrates social media and technology into his travels whether it’s to ask for rides or to search for places to sleep. Outsiders will view his social experiment as either brave or crazy because it comes with much risk-taking. Although, Woncho could care less about what others have to think and will do as he pleases.

We can take away a lot of inspiration from this awesome globetrotter. You never know where the next step will lead you so don’t get too comfortable with where you’re at. Maybe your future is another city with new friends and experiences? According to Woncho, you can definitely go anywhere or do anything if you set your mind to it. To use his own words, “There is no excuse!”

What’s with the name?

My name is Woncho. I tell people “Woncho like Poncho” but it’s really Hoang-Chau Nguyen. It came from kindergarten. I try to tell people my real name like how my mom says my name but Woncho just stuck.

I am originally from Mesquite, Texas. I have been living in Austin for the past 2 years and I wanted to get the fuck out of Dallas so I went to Texas State University for college. I lived in San Marcos for two years and I went to live in Austin so now I am here.

What are you currently working on?

Right now, I am working on a documentary. For money, I work in field marketing or (a) brand ambassador. After finishing my documentary I have an idea for a startup. My idea is aimed at other people who want to start a crowd funding campaign, meaning I provide services to those who need help with managing/PR/copywriting/video/pitch/creative services.

How did you start?

When I was 18, I started a homeless experiment because my girlfriend and I broke up. I asked my friends for advice and they said to go to the woods for 2 weeks but there aren’t woods in Dallas.  I started going homeless in downtown Dallas, homeless shelters, and blogging about the experience on MySpace. What I wrote for 10 friends ended up getting 10,000 hits. I was surprised that people were interested in me and my writing. In the following year, I had a girlfriend in Philadelphia. Me and my friend were like, “Dude. Let’s go do something this year.” I ended up hitchhiking from Dallas to Philadelphia in 3 days.

How do you catch a ride? 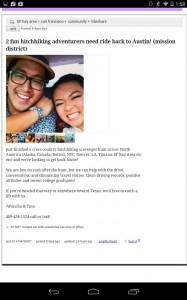 Sometimes, I’m walking up to a gas station and asking every person filling up their car if they are heading somewhere. Now there are other ways to catch a ride for free or cheap. I usually go for free. I use Craigslist Rideshare. Half of the time, I get rides by posting on Facebook. I’ll catch a ride halfway and hitchhike the rest somehow.

For a girl, it is obviously inevitable that you will get hit on. One time, I was hitchhiking with my now girlfriend, Tina. A trucker tried to make out with her in a restroom but she got away from him. She was in an uncomfortable situation, which shows that you need to have a “no-nonsense attitude” as a female hitchhiker towards that sort of behavior. We also carry knives and pepper spray but we’ve never been in a situation where we’ve had to use them. For the most part, people are helpful and generous.

Where have you traveled to?

I’ve hitchhiked through 49 states and Canada, except Montreal and Vancouver. I’ve been to Toronto once.

Last year, Tina and I flew one-way to Alaska. We just got a one-way ticket. We were doing cross-country and scavenger hunt for $100,000. We didn’t win though. We hitchhiked through Alaska and Canada towards Detroit. We had to go through 10 locations throughout North America; Tijuana was a spot, North Pole was a spot. 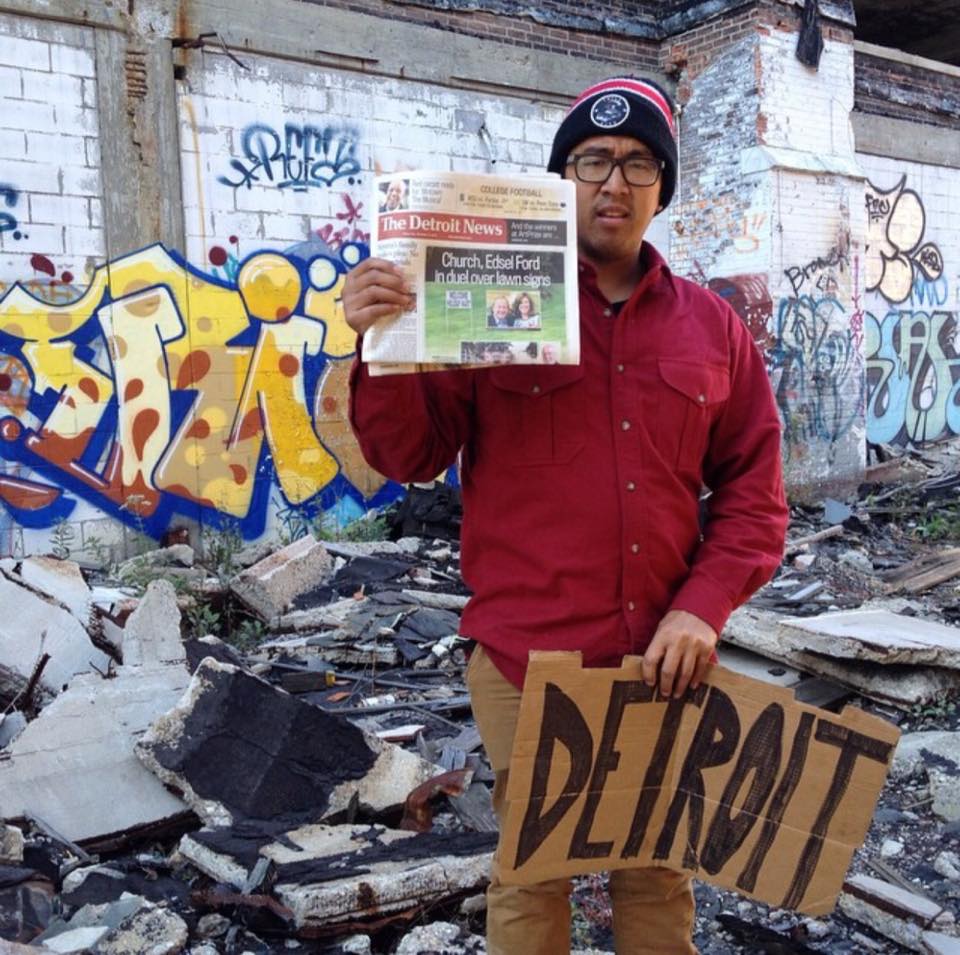 How do you use Snapchat and Instagram to travel?

For example, I will post that I am going to New York and have others message me if they are going that way. Sometimes, I will get direct messages from people who tell me that they have friends heading to DC and I’ll ask for their contact number.

What type of challenges do you face?

There are daily challenges of finding places to sleep and where you’re trying to eat for the day. Let’s say we are trying to get to Phoenix but don’t even make it to El Paso. Where are we sleeping tonight? You have to figure out where to sleep without cops bothering you or sneak into a trucker lounge at a stop. You have to figure out everyday logistical problems. The bigger challenges are motivating yourself in getting a ride and no one picking you up like two hours which is the longer side. It’s just staying motivated to get picked up but it’s my mentality that you’ll always get picked up. A lot of times, Tina wanted to quit. There are challenges of hitchhiking with other people and alone. On your own, you have to problem-solve and learn to communicate with strangers.

When is your next trip?

I am supposed to meet a friend in San Francisco and he wants to hitchhike to New York City. I told him that I’d show him the ropes and he takes awesome photographs. I could use your pictures and show you how to hitchhike so it was mutually beneficial. I have been hitchhiking on and since I was 19 in between school sessions but have been focused on publicly documenting for the last 2.5 years.

What are you doing when you’re not hitchhiking?

I’m pretty much like every other dude. I like to go out, drink, meet up with friends, watch movies, Netflix, and try out food trucks in Austin, TX. 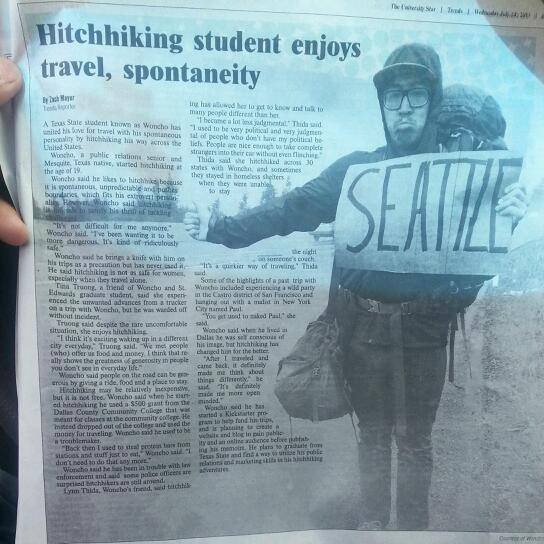 How does it feel to inspire others?

That is my goal to why I hitchhike and write about stuff. I want to inspire more people to travel more, not necessarily hitchhike. If I can do it under extreme circumstances, you have no excuse to get in your car and go to Houston for a day and eat some random food for a day or something.

What is your advice for new hitchhikers?

If you want to hitchhike, you should go with someone experienced. If you guys want, you can hit me up maybe if you are going somewhere I’d want to go. Maybe I’ll show y’all something, I don’t know. Just find me. (If you want to know more read his tips for success.)

Where can we find you? 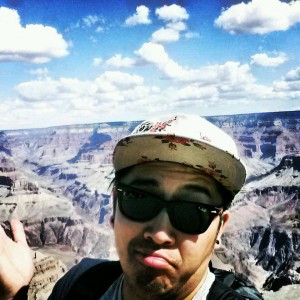 Couchsurfing – find a place to stay

Hitchwiki – the hitchhiker’s guide to hitchhiking the world

Roadtrippers – plan your trip around America

Crisp, clean t-shirt printing without setup fees or hidden costs, delivered on time! Get a quote

We are located off the 183 access road behind Smart Buy office furniture.

We are excited to help with your upcoming project. You can get a quote here or contact us.

Would you like stay up to date on the latest happenings, deals, or promotions? Following us across our Social Networks.